Welcome to my Music Diary – today for the 25th December!

On the 25th December 1945, David Noel Redding was born in Folkestone, UK. Redding became in 1966 the bass player for Hendrix‘ band The Jimi Hendrix Experience. At the age of 9 years, David Noel started playing violin, mandolin and guitar. Before joining Jimi Hendrix as the bassist, he played guitar for The Strangers, The Lonely Ones, Neil Landon & The Burnettes and The Loving Kind. In 1969 he left the Jimi Hendrix Experience. His bass lines can be heard on the masterpieces „Are You Experienced„, „Axis: Bold as Love“ (both 1967) and „Electric Ladyland“ (1968).

In 1972 Noel Redding moved to Ireland and formed The Noel Redding Band with Eric Bell from Thin Lizzy, Dave Clarke, Les Sampson and Robbie Walsh.They recorded two studio albums and broke up in 1976. Redding kept up recording and touring over the years. On the 11th May 2003 Noel Redding passed away at the age of 57. He was found dead in his home in Clonakilty. It was reported that Redding died from „shock haemorrhage due to oesophageal varices in reaction to cirrhosis of the liver“.

Get your Jimi Hendrix stuff here (for Austrian customer):

Welcome to my Music Diary – today for the 27th November!

Happy birthday to James Marshall “Jimi” Hendrix, who was born on the 27th November 1942 in Seattle, Washington. Jimi is still considered as one of the greatest guitarists of all time. In the sixties he started his career and worked with The Isley Brothers, Little Richard and Curtis Knight and the Squires. In 1966 Hendrix moved to London and started his own group The Jimi Hendrix Experience and recorded the three legendary milestones “Are You Experienced“, “Axis: Bold as Love” (both 1967) and “Electic Ladyland” (1968) including the  hits „Hey Joe„, „Purple Haze„, „The Wind Cries Mary“ and „Voodoo Chile„.

In 1969 Hendrix headlined the festival in Woodstock and one year later at the Isle of Wight. On the 18th September 1970, Jimi Hendrix died from barbiturate-related asphyxia at the age of only 27 years.

Although his very short career spanned only over four years, he is widely regarded as one of the most influential electric guitarists in Rock history. The Jimi Hendrix Experience was inducted into the Rock and Roll Hall of Fame in 1992 and Jimi was appropriately described as „arguably the greatest instrumentalist in the history of rock music“.

Get your Jimi Hendrix stuff here (for Austrian customer):

Welcome to my Music Diary – today for the 23rd October!

On the 23rd October 1966, the Jimi Hendrix Experience recorded their first single. Jimi, Mitch Mitchell (drums) and Noel Redding (bass) choosed the traditional „Hey Joe„, which the trio recorded in London at De Lane Lea studios.The single was produced by Chas Chandler and hit the stores on the 16th December 1966 in the UK with „Stone Free“ on the flip side. And it was the first top ten hit for Jimi Hendrix and his band – the song reached No. 6 on the UK Single Charts. US fans had to wait for the single release until 1st May 1967 – with „51st Anniversary“ on the B-side. Contrary to the British market the song failed to chart in the USA. 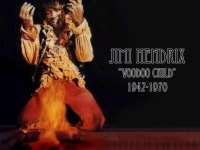