Welcome to my Music Diary – today for the 29th January!

Happy birthday to Mr. Thomas Erdelyi alias Tommy Ramone, who was born on the 29th January 1949 in Budapest, Hungary!

Thomas was Jewish and his parents had survived the Holocaust. In 1953, his family emigrated to the USA and settled down in Forest Hills, New York. In the sixties and during his time at High School, he began playing drums and with guitarist John Cummings they performed together in a group called Tangerine Puppets. After the band broke up in 1967, Tommy and John became friends with bassist Douglas Colvin and singer Jeffrey Hyman. In 1974 they founded their own band called Ramones and the members changed also their surnames into Ramone. John Cummings became Johnny Ramone, Douglas Colvin named himself Dee Dee Ramone and Jeffrey Hyman called himself Joey Ramone. Tommy was supposed to be the manager but he overtook the drums, because nobody was able to play this fast tempo. On the 30th March 1974, the Ramones played their first gig at Performance Studios and in August the quartet performed the first time at the legendary CBGB (usually referred to as CBGB’s). The Ramones became very quick one of the most well known Punkbands in and around New York. In 1975 the group was signed by Seymour Stein of Sire Records. Until 1979 the studio albums „Ramones“ (1976), „Leave Home“ (1977) and „Rocket to Russia“ (1977) were released and also the live LP „It’s Alive“ (recorded in 1977 and released two years later) hit the stores.

Tommy Ramone’s last show as the Ramones drummer took place on the 4th May 1978 at the CBGB’s, but he stayed in the band for a while as the manager and producer. Later he performed with Claudia Tienan (formerly of underground band the Simplistics) as a Bluegrass Folk duo called Uncle Monk.

Tommy Ramone later suffered from bile duct cancer and on the 11th July 2014 he passed away at the age of 65.

Get your Ramones stuff here (for Austrian customer):

Welcomt to my Music Diary – today for the 8th October! 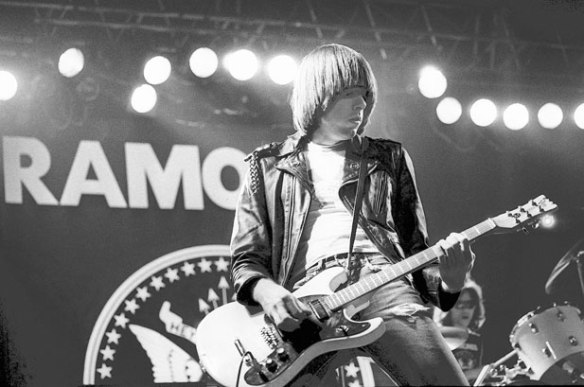 On the 8th October 1948, Mr. John William Cummings aka Johnny Ramone was born in Long Island, New York. He was the guitarist and a founding member of the legendary Punk-Rockband Ramones.

In the early seventies he met bassist Douglas Colvin, who became later Dee Dee Ramone and Jeffry Hyman aka Joey Ramone. Drummer Tommy Erdelyi aka Tommy Ramone completed the line up of the Ramones. The band was officialy founded in 1974. On the 30th March of the same year the very first gig happened at the Manhattan’s Performance Studios. Until the band break up in 1996, the Ramones performed 2,263 concerts during  a more or less nonstop touring over 22 years all over the world.

The self titled debut was released on the 23rd Arpil 1976 and it features Punkrock classics like „Blitzkrieg Bop„, „Beat on the Brat“ or „Now I wanna sniff some glue„. One year later the follower „Leave Home“ hit the stores and with „Rocket to Russia“ (1977) featuring the punk classic „Sheena is a Punk Rocker“ the Ramones released their best selling album in their career. Until 1995 eleven more studio albums were recorded before the band called it a day one year later.

Johnny Ramone died of prostate cancer on 15th September 2004 at the age of 56 years. Two of his former bandmates died before Johnny: Joey Ramone in 2001 and Dee Dee Ramone in 2002. And in 2014 Tommy Ramone the last of the original band members died.

Get you Ramones gear here (for Austrian customer):