Welcome to my Music Diary – today for the 24th January! 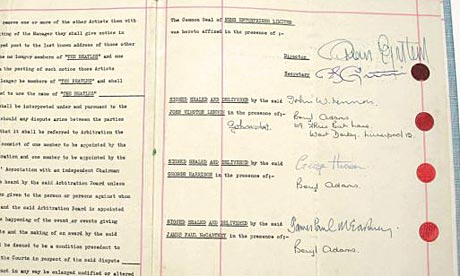 On the 24th January 1962, manager Brian Epstein signed a contract with The Beatles. The management deal was time-limited for five years and gave Epstein 10 – 15 % of their income. Interestingly, Epstein didn’t sign this first contract: „Well, if they ever want to tear it up, they can hold me but I can’t hold them“. After that, Brian Epstein formed his own management company „NEMS Enterprises“. And on the 1st October 1962, the deal was renewed (including a three years publishing contract signed by John Lennon and Paul McCartney) and gave the manager 15 unitl 25 % of revenues, depending on Epstein’s help to increase the band’s earnings.

Four days later, the first single by The Beatles was released: „Love Me Do„, backed by „P.S. I Love You„, reached No. 17 on the UK chart and marked the beginning of an outstanding career of one of the most successful pop bands in history.

Welcome to my Music Diary – today for the 8th December! 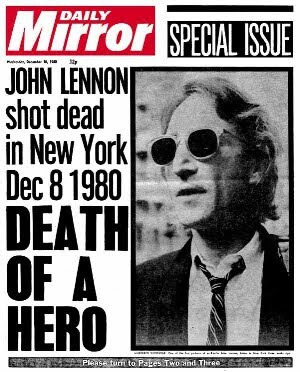 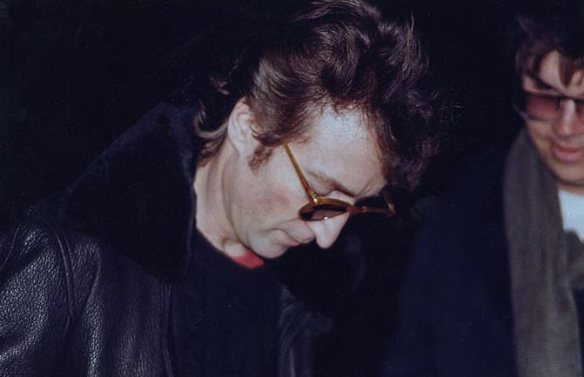 Before Lennon and Ono were going go the Record Plant Studio, Chapman asked John for an autograph and the musician signed the cover of „Double Fantasy„. Then the ex-Beatle headed to the taxi.

John Lennon and his wife Yoko Ono returned appr. at 10.50 pm to their aparrtment at the Dakota building where Chapman already waited. Then the tragedy happened: Chapman shot Lennon four times in the back. The British musician was taken to the emergency room of nearby Roosevelt Hospital, where he was pronounced dead on arrival at 11.07 pm. The massive loss of blood caused the tragic death of the former Beatles member. John Lennon died at the age of 40 years.

Yoko Ono issued a statement the next day:
„There is no funeral for John“, ending it with the words, „John loved and prayed for the human race. Please pray the same for him.“

John Lennon’s body was cremated at Ferncliff Cemetery in Hartsdale, New York. His ashes were scattered in New York’s Central Park, where the Strawberry Fields Memorial was created in 1985.

Murder Mark Chapman pleaded guilty to second-degree murder and was sentenced to 20 years to life. He still remains in prison – all his paroles (eight times) have been denied.

Get your John Lennon stuff here (for Austrian customer):

Welcome to my Music Diary – today for the 29th November! 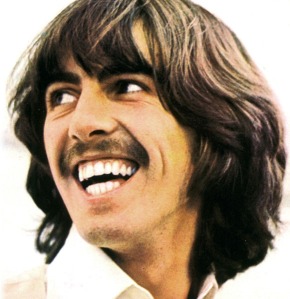 On the 29th November 2001, George Harrison died at the age of 58 years of lung cancer. The Beatles guitarist passed away in Los Angeles. Born on the 25th February 1943 in Liverpool, the very young Harrision joined at the age of 15 a band called The Quarrymen in 1958, which became in 1960 The Beatles. Beside the many hits, which were composed mainly by John Lennon und Paul McCartney, also George Harrision wrote some classics like „While My Guitar Gently Weeps“ (1968), „Here Comes the Sun“ and „Something“ (both 1969). After the break-up in 1970, George Harrison concentrated more on his solo career. After his two albums „Wonderwall Music“ (1968) and „Electronic Sound “ (1969) his third effort „All Things must Pass“ (3-LP-Set) marked his first solo work after the official end of The Beatles. This triple set features also the hit „My Sweet Lord“ (released in November 1970). In 1971 George Harrison organised the charity event „Concert for Bangladesh„, which took place on the 1st August 1971 at the Madison Square Garden in New York. Beside his music career, George Harrison worked also as a film producer. In 1978 he co-founded „HandMade Films„, which produced the classic „Monty Pyhton’s Life of Brian“ (1979).

Welcome to my Music Diary – today for the 24th October! 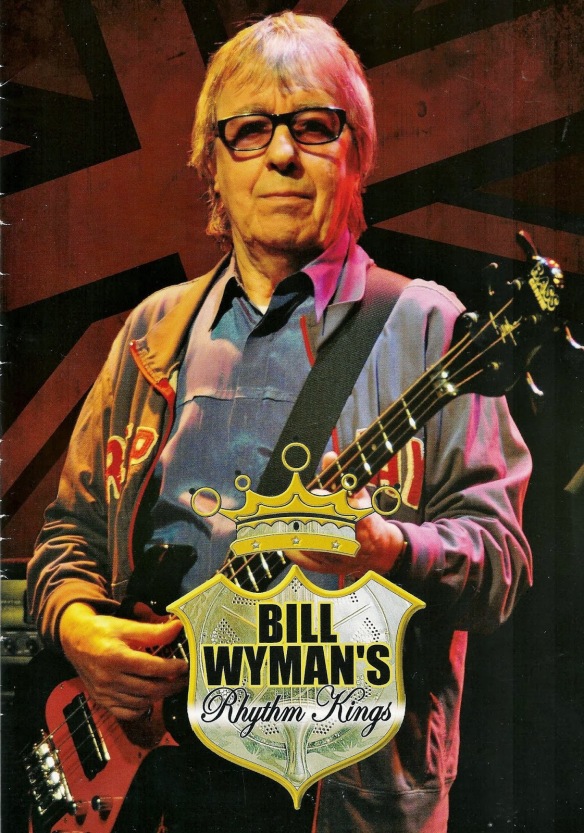 Happy birthday to Mr. William George Perks „Bill“ Wyman, who was born on the 24th October 1936 in Penge, Kent (UK). Bill Wyman was the bassist for The Rolling Stones from 1962 until 1993. Hired officially on the 7th December 1962, he announced his leaving after the Steel Wheels/Urban Jungle Tours (1989 – 1990) in January 1993. Darryl Jones took over his place and Bill started in 1997 his own band Bill Wyman’s Rhythm Kings (featuring Albert Lee and Georgie Fame).

When Bill joined The Rolling Stones in 1962, the band was also impressed by his instrument and amplifiers. Wyman was married, employed and the oldest member of the Stones at their beginning. Drummer Charlie Watts followed in January 1963 and so the classic line up was complete with Mick Jagger (Vocals, Harmonica), Keith Richards (Guitar), Brian Jones (Guitar) and Ian Stewart (Keyboards). With the release (7th June 1963) of the first single „Come On“ (Chuck Berry cover) the legendary history of The Rolling Stones has been started. 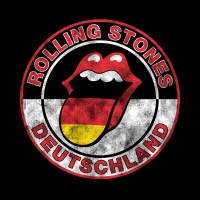 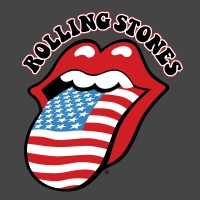 Welcomt to my Music Diary – today for the 7th June! 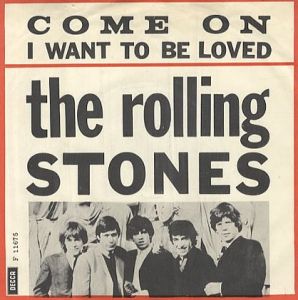 On the 7th June 1963, the debut single „Come on“ by The Rolling Stones was released. The song was written and already released by Chuck Berry in 1961. For the flip side the Stones also choosed a cover version – Willie Dixon’s „I want to be loved“. Both tracks were recorded on the 10th May 1963 at the Olympic Sound Studios in London. The single reached No. 21 on the UK chart. 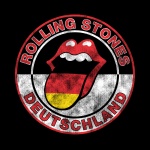 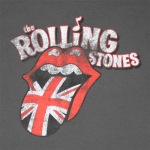 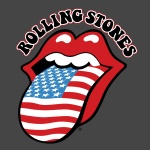 Welcome to my Music Diary – today for the 14th April! 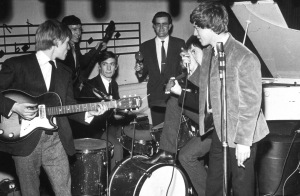 On the 14th April 1963, The Rolling Stones played at the legendary Crawdaddy Club in Richmond, Surrey (UK). And among the visitors, the four Beatles were also in the audience.

Keith Richards remembers:
„Brian wanted to be a pop star the minute he saw the Beatles. He got left behind in the crush and someone asked him for his autograph. Success went to Brian’s head immediately. And the more successful we became, the more he thought it interfered with his compatibility with the band, the more he thought he was involved in a competition with me and Mick.“

Mick Jagger continues:
„Keith liked the Beatles because he was quite interested in their chord sequences. He also liked their harmonies, which were always a slight problem to the Rolling Stones. Keith always tried to get the harmonies off the ground but they always seemed messy. What we never really got together were Keith and Brian singing backup vocals. It didn’t work, because Keith was a better singer and had to keep going, oooh, ooh ooh (laughs). Brian liked all those oohs, which Keith had to put up with. Keith was always capable of much stronger vocals than ooh ooh ooh.“

Welcome to my Music Diary – today for the 20th March! 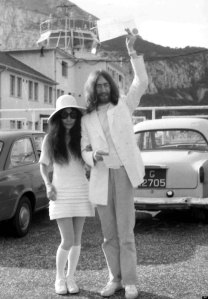 On the 20th March 1969, John Lennon married Yoko Ono in Gibraltar. The ceremony took place at the British Consulate Office and the just hitched couple spent their honeymoon in The Netherlands at the Amsterdam Hilton, where John and Yoko campaigned for an international „Bed-In“ for peace.

Welcome to my Music Diary – today for the 9th February! 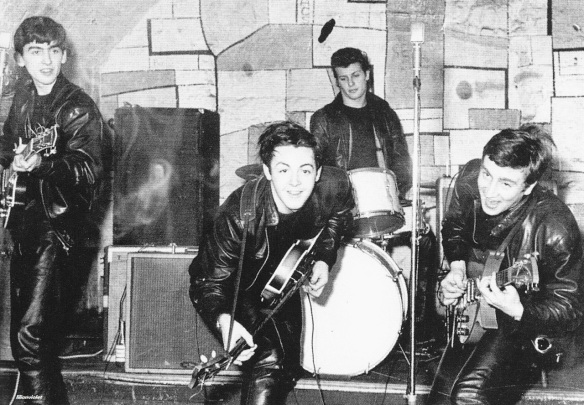 On the 9th February 1961, The Beatles played the very first time at the legendary Cavern Club in Liverpool! This was the start of many more performances to come – the quartet played from 1961 until 1963 exactly 292 times at The Cavern Club. The last concert of the „Fab Four“ at this very historic location took place at the 3rd August 1963.

Shop for THE BEATLES here:

Hey Musicaddicts all around the world!

Today, on the 18th June, I am remembering two breathtaking performances:

Back in the year 2000 I attended one of the best shows I’ve ever seen: Pearl Jam played an outstanding open air gig in Salzburg at the wonderful Residenzplatz. And when the sun set down the full moon came up and brightened up the old city in a perfect light. Luckily this concert was recorded and released as a 2-CD-Set.

Ten years later me and my friend headbanged in Paris at the Stade de France with AC/DC. Before Angus & Co. gave us an overdose of Rock’n’Roll, Mr. Saul Hudson (better known as Slash), kicked our ass!

Pictures, videos, setlist etc. about the mentioned shows you can find here (just scroll down to the date of 18/06):
https://melomaneblog.wordpress.com/category/concerts-june/

By the way:
Mr. Dizzy Reed, who plays still with Guns n‘ Roses, has his birthday today – happy bday!!! Also all the best to Paul McCartney, who turned 71 today 😉