Welcome to my Music Diary – today for the 21st December! 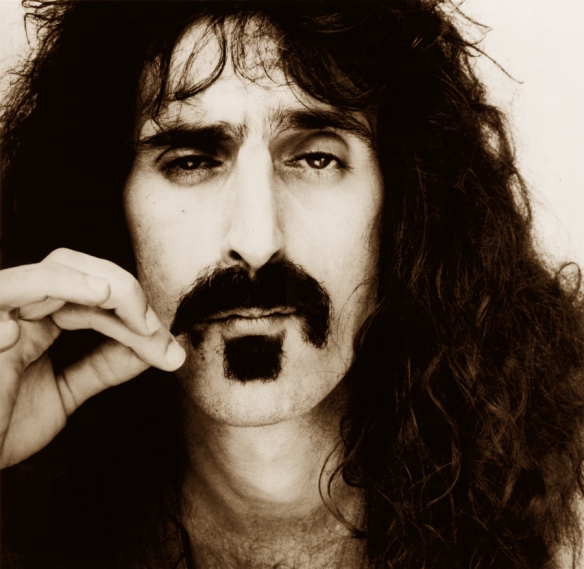 Happy birthday to Frank Vincent Zappa, who was born on the 21st December 1940 in Baltimore, Maryland! The American musician was one of the most innovative and outstanding artists in rock history, who recorded over 60 albums of nearly all kind of music from Rock to Jazz up to Avant-Garde, Classical and contemporary music.

In 1966 his first album “Freak Out!” with The Mothers of Invention was released. With this double LP set, Frank Zappa became very fast the new and radical voice in the music scene. The follow-ups “Absolutely Free”, “Lumpy Gravy” (both 1967) and “We’re Only in It for the Money” (1968) proved his innovative and fresh style of mixing all kinds of music. With “Uncle Meat“ (1969) Zappa and his group went another step further into Avant-Garde, before Frank recorded his first solo album “Hot Rats” (featuring guest vocals Captain Beefheart on “Willie the Pimp”). This LP is still considered as one of the first Jazz-Rock-Fusion recordings ever. In the seventies Frank Zappa entered the charts with the milestones “Over-Nite Sensation” (1973), “Apostrophe” (1974), “One Size Fits All” (1975), “Sheik Yerbouti” (1978 – feat. the hit single “Bobby Brown„) and the trilogy “Joe’s Garage” (1979). Also in the eighties the multi-instrumentalist recorded further albums and in November 1993 the orchestral music piece “The Yellow Shark“, which was recorded live in Europe one year before, hit the stores. Only one month later, Frank Zappa passed away. He died on the 4th December 1993 from prostate cancer at the age of 53. 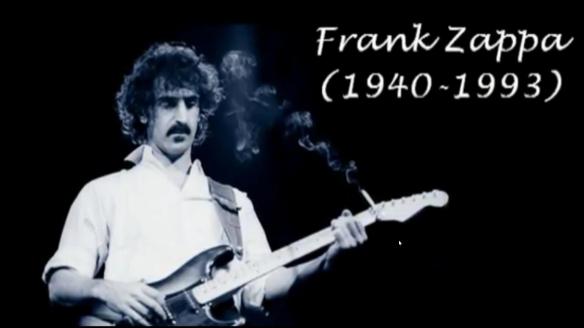 Get your Fank Zappa stuff here (for Austrian customer):

Welcome to my Music Diary – today for the 4th December! 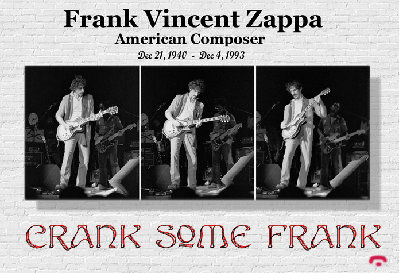 On the 4th December 1993 one of the most outstanding musicians passed away: Frank Vincent Zappa died at the age of 53. The American musician was born on the 21st Decmeber 1940 in Baltimore, Maryland. Zappa composed in his long and unique career nearly all kind of music from Rock to Jazz up to Classical. In over thirty years the multiinstrumentalist recorded over 60 albums.

In the fifties Frank Zappa met Don Van Vliet who later changed his stagename into Captain Beefheart. They became friends and around that time Frank started to play drums in a Californian band called „The Blackouts“. In 1957 he improved more and more his guitar skills. During the early sixties Zappa wrote, produced and recorded on many different projects. In 1965 he joined the local band „Soul Giants“ by invitation from Ray Collins, who asked him to take over as the guitarist. Shortly after that the group was renamed in The Mothers and Zappa became the frontman. In 1966 the label Verve insisted to change the name into The Mothers of Invention and the debut album „Freak Out!“ was released. The double LP-set features a very innovative mixture of all kind of music genres and showed Zappa as a very radical and new voice in the music scene. In 1967 the second album „Absolutely Free“ featuring the songs „Plastic People“ and „Brown Shoes don’t make it“ hit the stores. Zappa about this record: „We’re satirists, and we are out to satirize everything.“

The follow-up „Lumpy Gravy“ was another prove of Zappa’s unbelievable diversity in music. After moving with his wife Gail Zappa (born Adelaide Gail Sloatman) and his band to New York, the milestone „We’re Only in It for the Money“ (1968) was released. The cover was designed as a parody of The Beatles‚ „Sgt Pepper’s Lonely Hearts Club Band.“ In the same year „Cruising with Ruben & the Jets“ was recorded and in 1969 the opulent „Uncle Meat“ feat. the track „King Kong“ confirmed one more Zappa’s widely creativeness. Then the band disbanded and Frank Zappa released his first official solo album called „Hot Rats“ featuring the songs „Peaches en Regalia“ and „Willie the Pimp“ (guest vocals by Captain Beefheart). This LP is still considered as one of the first Jazz-Rock-Fusion recordings.

In the seventies a short reunion of The Mothers of Invention took place and with the three LPs „Over-Nite Sensation“ (1973), „Apostrophe“ (1974) and „One Size Fits All“ (1975) Frank Zappa entered the album charts and earned commercial success. Also with the following albums, especially „Sheik Yerbouti“ with the hit single „Bobby Brown“ (1978) and the trilogy „Joe’s Garage“ (1979).

In the Eighties, Frank Zappa continued recording a wide range of records with all different music styles. On the 2nd November 1993 his last recording was released: The orchestral music piece „The Yellow Shark„, which was recorded live in Europe one year before, hit the stores. One month later, on the 4th December 1993, Frank Zappa passed away. He died from prostate cancer.