Welcome to my Music Diary – today for the 8th January! 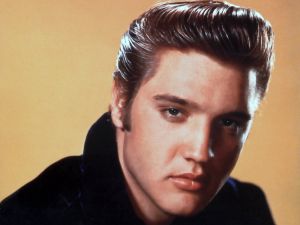 Happy birthday to Elvis Presley, who was born on the 8th January 1935 in Tupelo, Mississippi! At the age of 13 he and his family moved to Memphis. In August 1953 he started his unique career by recording his first songs at the legendary Sun Records studios, produced by the label owner Sam Phillips. The two-sided acetate disc contained the tracks „My Happiness“ and „That’s when your Heartaches begin“. A few months later, in Janury 1954, Elvis recorded his second acetate at Sun Records: „I’ll never stand in your Way“ and „It wouldn’t be the same without you“. But again, he didn’t succeed as a singer and so he started working in April as a truck driver for the Crown Electric company. On the 5th July 1954, the historic session happened: Elvis Presley began playing the Blues number „That’s All Right„, written by Arthur Crudup. A single of that song was produced and Memphis DJ Dewey Phillips played it three days later on his „Red, Hot, and Blue“ show. Listeneres began phoning over and over again, asking who this new singer was. The interest became so huge, that the record was playing repeatedly during the last two hours of the radio show. This was the start of Rock’n’Roll and Elvis‘ outstanding career get started.

The „King of Rock’n’Roll“ won three Grammys and over 600 million albums were sold worldwide. On the 16th August 1977, Elvis Presley died at the age of only 42 years.

Get your Elvis stuff here (for Austrian customer):

Welcome to my Music Diary – today for the 27th December!

Happy birthday to Mr. Winfield Scott „Scotty“ Moore III, who was born on the 27th December 1931 in Tennessee (USA)! Scotty became very well known as the guitarist for The King of Rock’n’Roll, Mr. Elvis Presley!

Moore’s first group was Doug Poindexter & the Starlite Wranglers, before he played his first Sun Studio sessions with Elvis Presley in 1954. His unique playing can be heard on classics like „Blue Suede Shoes„, „Heartbreak Hotel„, „Mystery Train„, „That’s All Right (Mama)„, „Hound Dog“ and „Jailhouse Rock„. When Moore’s solo album „The Guitar That Changed the World“ was released in 1964 on Epic Records, Sam Phillips from Sun Records was very upset and Scotty Moore was sacked. Scotty played his last show with Elvis on „Elvis NBC TV-Special“ in 1968, which is better known under the moniker „68 Comeback Special„.

After that, Moore continued playing and recording with several artists like Carl Perkins, Dolly Parton, Johnny Cash, Jerry Lee Lewis, Eric Clapton and Keith Richards. In 2000, Scotty Moore was inducted into the Rock and Roll Hall of Fame.

Get your Elvis stuff here (for Austrian customer):

Welcome to my Music Diary – today for the 22nd September! 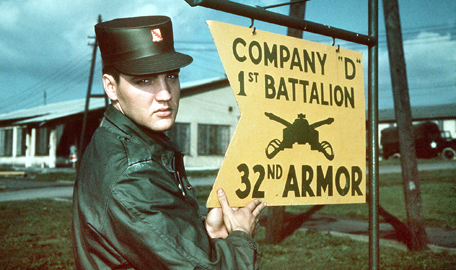 On the 22nd September 1958, Elvis Presley gave a press conference at the Military Ocean Terminal in Brooklyn, before joining the 3rd Armored Division on the USS Genereal Randall in Bremerhaven, Germany. The „King of Rock’n’Roll“ answered questions about his army duty, music and family. After the press conference Elvis boarded the U.S.S. Randall.

Listen to this historic press conference:

A few months before that press conference, Elvis Presley was inducted into the U.S. Army on 24th March 1958. During his stay in Germany (Friedberg), Elvis met the 14 years old teenager Priscilla Beaulieu during a party at Elvis‘ home in Bad Neuheim. On the 1st May 1967 the couple get married. Only five years later Elvis and Priscilla seperated on 23rd February 1973. Their only child, Lisa Marie, was born exactly nine months after their wedding, on 1st February 1968.

Welcome to my Music Diary – today for the 1st May!

On the 1st May 1967, Elvis Presley married Priscilla Beaulieu at the Aladdin Hotel in Las Vegas. Exactly one year later, Elvis‚ only child Lisa Marie, was born. After only five years, the couple divorced on 9th October 1973.