Welcome to my Music Diary – today for the 20th November! 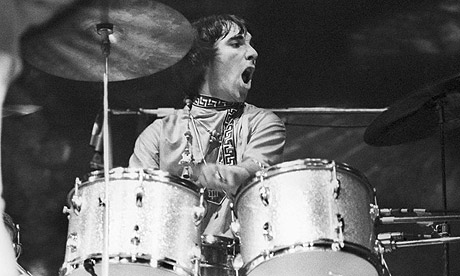 Keith Moon (The Who)

On the 20th November 1973 the Who drummer Keith Moon collapsed during a concert at the Cow Palace in Dale City, near to San Francisco. After approximately one hour, Moon began to falter during „Won’t Get Fooled Again„, slumped over his drum kit and passed finally out. He was carried offstage by the roadies.

Backstage the drummer received a special treatment and meanwhile guitarist Pete Townshend asked the crowd: „Can anybody play the drums? I mean somebody good!“ Scot Halpin, also a drummer, and his friend Mike Danese watched the scene, while Danese told the security staff, that the 19 years old Scot can play. Bill Graham, the concert promoter, asked: „Can you do it?“. After Halpin’s „Yes“, he filled in for Keith and played. After a Brandy he started while Townshend instructed him: „I’m going to lead you. I’m going to cue you.“ So the Who had a new member for three songs. They played the Blues standards Smokestack Lightning“ and „Spoonful“ before going into the Who song „Naked Eye„. So after approximately thirty minutes of absence, Keith Moon came back on stage to finish the show.

Get your Who stuff here (for Austrian customer):

Shop for THE WHO here: