Welcome to my Music Diary – today for the 5th March! 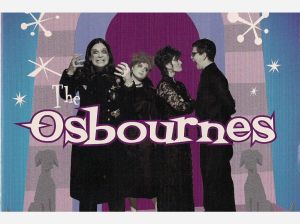 On the 5th March 2002, the reality show „The Osbournes“ had its premiere on MTV!

The program shows the life of Ozzy Osbourne and his family, featuring his wife Sharon and his kids Kelly and Jack. The final episode was aired on 21st March 2005. In 2002 the show won the „Primetime Emmy Award for Outstanding Reality Program„.

In 2009, the new variety show „Osbournes Reloaded“ for the Fox network happened. This series debuted on 31st March 2009, but it was canceled after the first episode. Now there are rumours, that eight new episodes will be filmed in 2015.

Get your OZZY stuff here (for Austrian customer):