Welcome to my Music Diary – today for the 20th January! 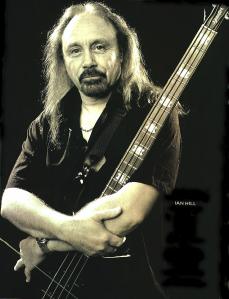 Happy birthday to Judas Priest bassist Ian Frank Hill, who was born on the 20th January 1951 in West Bromwich (UK)!

Taught by his father, who played in local Jazz bands, Ian Hill learned how to play the double bass. At the age of 19, Ian founded with guitarist Kenny “K.K.” Downing the band Judas Priest. Singer Rob Halford and second guitarist Glenn Tipton joined later. And with drummer John Hinch the debut album “Rocka Rolla“ (1974) was recorded. The LP was anything but a success. With the follow-up “Sad Wings of Destiny” (1976) the group became better known. Classic tracks like “Victim of Changes“, “The Ripper” and “Dreamer Deceiver” should get a fix place on future setlists. The special Judas Priest sound, with two guitars and Halford’s unique voice, has been refined over the years. Due to albums like “Sin After Sin” (1977), „Stained Class“, “Killing Machine” (both 1978) and “British Steel” (1980) the band is conisdered as the pioneer of British Heavy Metal.

Ian Hill has only three songwriting credits („Winter“ and „Caviar and Meths“ – both featured on „Rocka Rolla“ and „Invader“ from „Stained Class“). After the departing of K.K. Downing in 2011, Ian Hill is the sole constant founding member of Judas Priest.

Get your Judas Priest stuff here (for Austrian customer):