Welcome to my Music Diary – today for the 31st October! 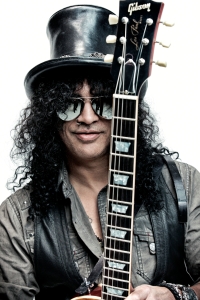 On 31st October 1996, guitarist Slash announced that he has left the Hardrock band Guns N‘ Roses.

In his book „Slash“ (2007) he remembers his historic decision:
„After working to make that band all that it could be for the better part of my life, saying good-bye to the institution I helped build was as alien as being launched into space. But once I’d done it, a weight was lifted from my shoulders and the lead was out of my shoes. It was like decompressing after a deepwater dive. The day I made my decision, I woke up early and called the powers that be to deliver the news, and went back to sleep. I don’t remember anything else of theat day aside from the fact that when I woke up again I was refreshed. I felt as if I’d just slept for a week.“

Slash was the lead guitarist in Guns N‘ Roses from June 1985 until October 1996. So after eleven years he was leaving one of the most successful rockbands in the world and started working on his solo career and other projects like Slash’s Snakepit and Velvet Revolver.

Get your Slash gear here (for Austrian customer):