Welcome to my Music Diary – today for the 29th September! 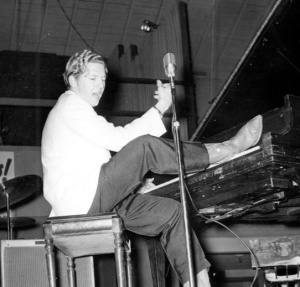 On the 29th September 1935 Mr. Jerry Lee Lewis aka „The Killer“ was born in the town of Ferriday, Louisiana (USA). The singer and pianist is considered as one of the greatest Rock’n’Roll musicians in history. At the age of 21, Jerry Lee Lewis traveled for an audition to the legendary Sun Records studios in Memphis, Tennessee. Jack Clement recorded the cover version of „Crazy Arms“ (formerly recorded by Ray Price) and Lewis‘ own composition „End of the Road“. One month later, in December 1956, Lewis started his solo career and became also a sessions musician for Sun Records. His unique piano playing can be heard on many recordings for artits like Carl Perkins and Johnny Cash.

In 1957 Lewis recorded his first hit „Whole Lotta Shakin‘ Going On„. And more chartbreaker followed like „Great Balls of Fire„, „Breathless“ and „High School Confidential„. After his marriage to his 13-year-old cousin Myra in the same year, his popularity was quickly gone due to this scandal. He still recorded all over the years and especially his wild live performances in the sixties became legendary. The live album „Live at the Star Club, Hamburg“ (1964) proves this: „‚Live at the Star Club‘ is extraordinary, the purest, hardest rock & roll ever committed to record“, so music critic Stephen Thomas Erlewine (Allmusic).

In 1989 the biographical movie „Great Balls of Fire!“ directed by Jim McBride with Dennis Quaid starring as „The Killer“ and Winona Ryder as Myra was released. For the soundtrack Jerry Lee Lewis re-recorded his songs.