Welcome to my Music Diary – today for the 26th September!

On the 26th September 1995 the 12th AC/DC album „Ballbreaker“ was released. It was the first time that the band worked with star producer Rick Rubin together, who already produced the single „Big Gun“ for the soundtrack to the Arnold Schwarzenegger blockbuster „Last Action Hero“ in 1993. And for longtime drummer Phil Rudd was this the celebration of his comeback (he retired in 1983 and was replaced by Simon Wright in 1983 – 1989 and Chris Slade in 1989 – 1993).

During the „Ballbreaker“ tour the following new songs were on the setlist: „Hard as a Rock„, „Boogie Man“, „Cover you in Oil„, „Hail Caesar„, and the title track „Ballbreaker“. 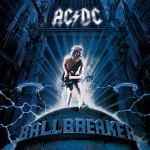 And grab more AC/DC stuff at the shops here (Germany/Europe):

And grab more AC/DC stuff at the shops here (USA):