Welcome to my Music Diary – today for the 8th September! 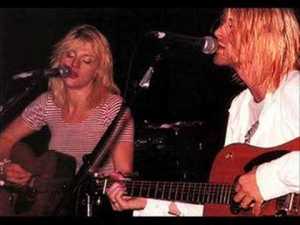 In 1993, Kurt Cobain and Courtney Love played a special set for the „Rock Against Rape Benefit“ at the Club Lingerie in Hollywood. As a duet they performed the two songs „Pennyroyal Tea“ and „Where did you sleep last Night„. Before Kurt came on stage, Cortney introduced him lovely with the words: „My husband, Yoko!“

About the song:
Originally, „Pennyroyal Tea“ is one of the oldest Nirvana songs. The first demo was recorded in Winter 1990 by Kurt Cobain and Dave Grohl. After that the recording was forgotten in the archives. During the sessions for „In Utero“ Cobain remembered the tune again and recorded it with his band. It became one of the best known Nirvana songs.