Welcome back again to my personal Music Diary – today for the 30th November!

Back in 2007 me and my friends did a short Woven Hand tour in France (three shows in a row). On the 29th we attended the show in Paris at the Divan Du Monde and one day later the next stop was in Sotteville-les-Rouen at the Trianon to see David Eugene Edwards performing again. And this show was BREATHTAKING and unbelievable POWERFUL! One of the best Woven Hand concerts I’ve ever been so far.

My review, pictures and the setlist of this memorable night you can see here (just scroll down to the bottom of the page for the 30th November)! 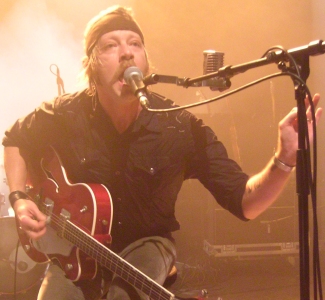 Stay tuned for the 1st December, when Woven Hand played in Amiens 😉

Hello and welcome back to my Music Diary – today for the 29th November!

Back in 2007 I attended my first concert in France – Woven Hand performed in Paris at the Divan Du Monde. It was such a wonderful live experience and we all were so happy that David Eugene Edwards brought his Concertina along for the two 16 Horsepower classics „Harm’s Way“ and „American Wheeze„. And this night I heard one of the best live versions of „Your Russia„.

Check out my review, setlist pictures and videos of that show right here (and scroll down to the date 29/11/2007)!

Hello again and welcome to my Music Diary entry for 28th November!

In 2012, and two days after the show in Linz at the Posthof, I attended another Calexico performance – this time in Salzburg at the Republic. And this one was also breathtaking and wonderful – another proof that Calexico is one of the best live bands ever!

Dear music lovers all around the world – welcome to my music diary for 26th November!

On this day I attended two shows:
Back in 2012 Calexico performed in Linz at the Posthof – apart from the annoying stage light, the concert was awesome and beautiful!

And in 2010 me and my friend headed to Rome for another Woven Hand live experience – read my review and check out some videos and pictures of the show in Italy right here (scroll down to 26/11/2010)!

Hello again to another entry in my personal Music Diary – today for the 25th November!

In 2008 I attended some Woven Hand shows in Europe – after the amazing concerts in Kortrijk and Paris the first date for Austria was on the tourplan. So David Eugene Edwards and his band rocked the Rockhouse in Salzburg for the second time after 2005.

And it was another breathtaking performance – you can find my review and pictures of the show here!

Welcome back to my personal Music Diary – today for 23rd November!

Back in 2008 I was in Paris again to see Woven Hand performing at the La Maroquinerie. The show was sold out and David Eugene Edwards, Ordy Garrison, Pascal Humbert and Peter van Laerhoven rocked the club with full intense. My review, pictures and videos of the amazing performance are here (just scroll down to the date of 23/11/2008)!

Welcome back to another entry in my personal Music Diary – today for the 16th November!

In 2006 Woven Hand played an amazing show in Salzburg at the ARGE. David Eugene Edwards, Ordy Garrision, Pascal Humbert and Peter van Laerhoven performed most songs from the releases „Mosaic“ and „Consider the Birds„. The concert was closed with the breathtaking and heavy „Your Russia“ – the video of this song, the setlist and pictures you can find here (just scroll down to the date 16/11)!

Hey music maniacs all around the world – welcome back to my Music Diary!

On the 15th November 1990 I added two very nice LPs to my collection:

Firstly a real collector for my Jethro Tull collection – „Stand Up“ with the funny pop-up sleeve! I was very long looking forward to have this one.

Welcome to my personal Music Diary – today for the 14th November!

This day is a very special one for me, because it was the beginning of an addiction to a very special sound – the so-called Denver sound! On the 14th November 1996 I received my copy of the fantastic debut album from the amazing group Sixteen Horsepower! I came across this band by the sampler „Rolling Stone Presents New Voices – Vol. 8“ which was edited with the German music magazine. On this CD the song „Haw“ hooked me immediately and so I ordered the album „Sackcloth’n’Ashes“ from a mail-order in Bremen.

The band line up at that time was David Eugene Edwards, Keven Soll and Jean-Yves Tola. As a special guest Gordon Gano from the Violent Femmes played violin on some tracks during the recording sessions back in 1995.

Unfortunately it took a long time to see this outstanding band live for the first time – but it happened in September 2002. After the show David was so nice to sign my cover of the US release 😉

For the songs „Black Soul Choir“ and „Haw“ two amazing videos were produced – watch them here:

Welcome back to my Music Diary – today for the 13th November!

In 2006 Nick Cave did a sort of solo tour – he was accompanied by the Bad Seeds members Martyn P. Casey, Jim Sclavunos and Warren Ellis. And yes, this line up is the same as in Grinderman, a side project by Nick Cave.

Setlist, pictures and reviews from Austrian newspapers can be found here – just scroll down to the date 13/11/2006!